Mary was in a car accident at an intersection in St. Louis, Missouri and badly injured. The police report was unclear as to who was at fault, and the other driver denied all liability. What we learned, through some hard work investigation, is that, given the sequence of the traffic lights at this intersection, there was no way the collision could have occurred if the other driver was NOT at fault. After a long period of argument from the insurance company, we presented this evidence to them. One week later we received a letter offering to pay the entire value of their driver's insurance policy to Mary. Such a great victory for a nice, deserving client. 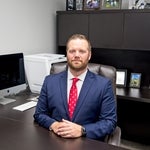